Our logo the origin story. (Happy Birthday to us)

Today is the first anniversary of the first HB branded meeting, so we are sort of one year old today, despite having run 2 Charity game days and having an online presence via Facebook for 2 years.

On the 6th March 2017, whilst on a work conference call, the image of the letter H and B imposed on dice popped into my head. I had been non seriously day dreaming about a logo for the group but hadn’t spent any real time on it.

This was what I doodled and sent around the core group. And yes that is my best handwriting…

Our logo the origin story.

With in a few hours we  had what would turn out to be an image very close to the final one.

Over the next week or two we swapped the font and made very minor tweaks including  the 3 lions of Herefordshire becoming a bull and then a different but more Hereford Bull. Below is a rough time line of the changes. We discussed more traditional styles, modern and heraldic. We settled on modern  clean heraldry, to  use the logo and bold images to get what we do and where we are from across. We didn’t want ‘traditional / old fashioned’ heraldry as didn’t want to seem to old / boring or fuddy duddy…..

I think the logo looks awesome, and very striking on our Tshirts.

The shield idea was quickly voted in over just the dice.

The concept of clean / modern Heradlry was also voted in.

Super rapid mock up. (within an hour I think)

Mock up without the rejected blue!

The colours were locked in and the softening of the dice really were the finishing touches. The dice corners was one of the times where you stare at a screen and know something wrong but can’t place it.  Instantly the softer corners ‘finished’ the logo. (only casino dice are hard edged I think)

The final logo. The Lions didn’t print or embroider too well so were swapped for a simpler cow, and then another more Hereford cow. Lines softened and general small touches 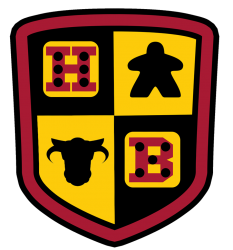 With much softer lines, It looks great on black and green and stands out well at a distance.  Overall very similar to my original drawing, not just because I’m a dick / dictator, the group had a long chat about it and we went though other versions and colours we just settled on this version.

Logo before and after

← Happy Birthday Hereford Board Gamers!!
The Pub game starter kit in the flesh! / Thanks to our host the Imperial! →