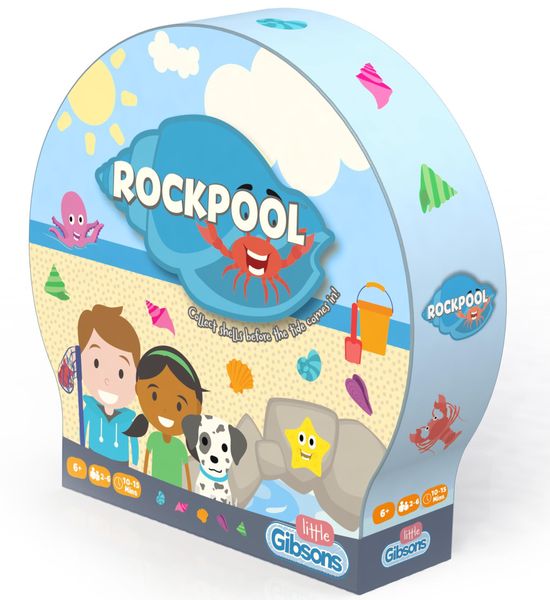 Rockpool involves collecting shells and cleaning up rubbish. Players push-their-luck against each other and the game itself before the tide comes in.

Each player has a team of five children and their dog. Players take turns to turn over Stone Cards to reveal what’s in the Rockpool: shells, starfish, creatures, dog toys or rubbish. At any time, players can “Shout” to use one of their team to empty the Rockpool and add the contents to their collection. Each child or dog can empty the Rockpool once. The children are trying to collect the most shells of their favourite type while their dogs want to collect the most different types of dog toys. Starfish give extra points whereas creatures deduct points. Rubbish can be good or bad depending on whether it is cleaned up or ignored.

Stone Cards occasionally reveal Waves that wash the contents of the Rockpool out to sea. After eight Waves the tide comes in and the game ends. Those who were most successful in their collecting celebrate by paddling in the Rockpool. The player with the most of their team paddling wins the game.

Rockpool is a good mix of easy to play but hard to master, making it enjoyable for players of different ages and abilities. The key challenge is judging when to Shout as players can only use each of their team cards once.