Board Game Posted on August 14, 2020 Posted in 2 Player, 3 Player, 4 Player, Adult, Board Game, Contains Expansion, Fantasy, Fighting, Light Complexity, On loan, Under 13, Under 8, Under two hours Tagged with On Loan 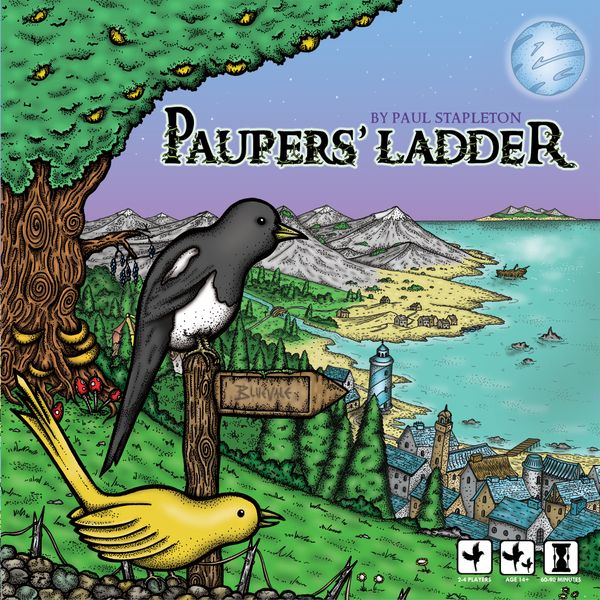 Garolium Scraggart, beloved ruler of the people, has died. Despite an upbringing of real hardship she rose to the highest rank in the royal court and did what she could to make sure the poorest in Brighthelm were not forgotten. She died too young, her work half done.

A tournament has been announced to find her successor. Brave knights have travelled down royal highways. Bold paladins have knocked on royal doors. So too have bards, lords and heroes. All looking to take over Scraggart’s reign and rule the realm to their desires.

And every one of them has been sent back to whence they came.

Because Garolium herself had devised the tournament. It was the last thing she did, and she decreed it would only be open to those of the most limited means. Those whose potential had been locked by the chains of ill-fortune and poverty. Brighthelm’s paupers. She had spent her whole life building their ladder and nobody was going to kick it away.

Play a pauper in Garolium’s tournament. Along with your bird companion, explore the wild and treacherous land of Brighthelm as you strive to learn three of the five virtues: generosity, fellowship, bravery, knowledge, and magnificence. Battle a bestiary of creatures, undertake quests, find ingredients to craft powerful recipes, and discover the sights and wonders of an exciting new world along the way. But beware! You’re not the only pauper in town…

In Paupers’ Ladder, the land of Brighthelm is illustrated with a playing board and over 400 cards depicting equipment, quests, recipes, monsters, ingredients, encounters, cities, villages and more besides.

The aim of Paupers’ Ladder is to learn any 3 of the 5 Virtues. Virtues are learned in different ways. For instance, you learn the Virtue of generosity by discarding a certain amount of gems from your purse. When a player has learned 3 Virtues, they have won the game.

You control 2 characters: your Pauper, and their Bird companion.

• PAUPER
There are 8 different Paupers to choose from, and each has their own unique piece of starting equipment. Your Pauper’s character card is where you’ll keep track of your progress towards learning Virtues.

• BIRD
There are 4 different Birds to choose from. Birds start the game untrained. You can pay to train your Bird to learn a unique ability.

When a Region is explored, you choose to either:

• Play a card that’s already in that Region by following the instructions on it.

• Draw a card from the top of that Region’s deck, place it there and follow its instructions.

The Region card you play will be one of the following:

• EVENT
Events include things like friendly citizens, equipment and villages.

• HAZARDS
Hazards are creatures and traps that must be fought.

• INGREDIENTS
Ingredients are used by your Pauper to learn recipes.

When you have moved and explored with both your Pauper and your Bird, play continues to the next player.