Board Game Posted on May 2, 2021 Posted in 1 Player, 2 Player, 3 Player, 4 Player, Adult, Board Game, High Complexity, In Stock, Over two hours Tagged with Available to borrow 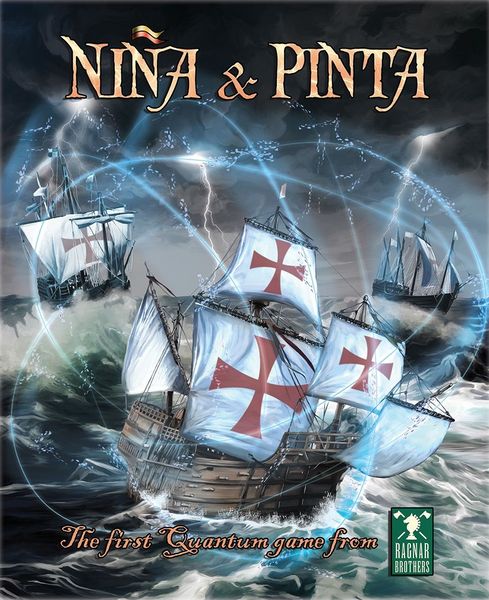 Quantum physics tells us ‘the ability of quantum particles to occupy two states seemingly at once could be explained by both states co-existing in different universes’. So when you wave goodbye to your ship in your universe, someone else waves goodbye to their ship in a different parallel universe. But what would happen if these neighboring universes, separated by the thinnest, gossamer barrier should somehow be breached and my ship sails into your world and searches for gold in competition to your ship? Play the game and find out…

Niña & Pinta is a game of exploration of the New World where the great nations of Spain, England, France and Portugal send ships out to map the unknown and to bring home wealth to the Old World. This is a game where those ships will cross the divide and where no love is lost between Captains no matter which world it is! Explore, settle, fight if need be, and help your nation develop its Culture, Science, Religion and War-craft, to be the best in all worlds!

No dice rolling in this Ragnar game, but plenty of tension as players can launch offensives with their Captains after first using them to flip land tiles thereby exploring each New World. Settlers are placed in explored lands to generate gold revenue. When combinations of terrain are occupied, towns and cities can be built. Meanwhile gold is used in the Old World to buy items to benefit further New World development or to accumulate the victory points generated by Culture, Science, Religion and War which themselves are meshed with what is taking place in the three New Worlds.

This is a tightly knit puzzle that will have players pondering a multiplicity of decisions from start to finish. As much of the play is simultaneous and “single-action”, there is little downtime. The game has a good sense of growth worthy of its fascinating theme.