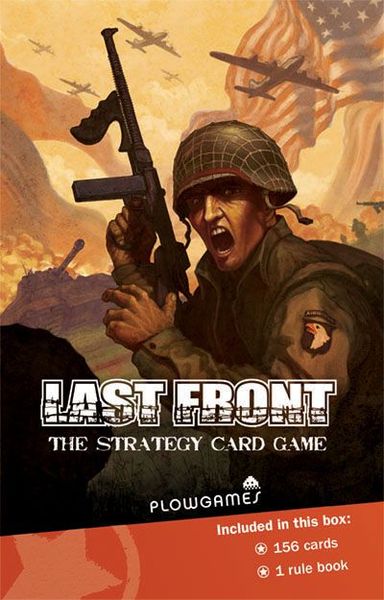 Last Front is a WWII-themed strategy card game in which players try to outbid each other and capture the most territories. There are 162 Cards total in the game that are divided into three decks: the Battle Deck, The Event Deck and the Territory Deck.

The Battle deck is made up of Unit cards, Special cards and Icon cards. These cards are drawn by the players and used to make their bids.

Unit cards are divided into four types: Troops, Tanks, Planes and Support. These all have a face value and different ratios within the Battle deck. There are more Troops than anything, but they are much lower value than Tanks or Planes. Support units have two values- a defense value and an attack value. If someone is trying to steal a territory you have captured they can be a powerful deterrent!Icon cards feature famous personalities from different nations and they each grant bonuses or special effects based on their role in the war. The famous spy Virginia Hall allows you to see an opponent’s hand and swap a card. Patton gives a per-card bonus to Tank units. Vasily Zaytsev and Lyudmilla Pavlichenko are snipers that can take out enemy Icons.

Special cards generally have special rules that can be disruptive to your opponents. Advanced Fighters boost your Plane values. Typhus eliminates all opponent Troops in a display. Blockades can stop an opponent from using any territory bonuses they may have.

The Territory deck contains territory cards that players bid for in battles. Winning territories not only gets you closer to winning, but players with a controlling share of a territory type get a bonus that is unique to that country. The USSR gets a bonus to Defense cards. Germany gets a bonus for Tanks.
The Event deck contains random events that can have a major impact on how a battle progresses. Fog of War forces all players to swap the cards in their hand with a new draw from the Battle deck. Winter impacts all Unit cards played for the rest of a battle, forcing players to commit more cards to a bid in order to stay in.

Game play is fairly straightforward. Players make bids to capture territories by placing cards from their hand face up into their display in order to outbid their opponents and capture Territory cards. Bid values consist of the cumulative value of the cards – including any modifiers from Special, Icon or Event cards and Territory bonuses.

Because players only get two opportunities to draw fresh cards –one at the start of their turn and one when they either win or withdraw- every card is a vital resource. Players that over commit run the risk of leaving themselves open for attack on subsequent battles. There is an additional “digging in” rule that allows players to commit cards in piles of 10 points each. This prevents those cards from being affected by other player’s burn cards and has the added benefit of cutting down on the amount of math that’s required.

This continues until only one player remains, at which point the territory card is awarded to them and they declare the next battle. Victory conditions are based on the number and type of Territory Cards a player has accumulated. 2 of a kind or 3 different territories will win the game.