Board Game Posted on July 23, 2020 Posted in 3 Player, 4 Player, 5 Player, Adult, Board Game, In Stock, Light Complexity, Train, Under 13, Under 60 minutes, Under 8, Worker Placement Tagged with Available to borrow 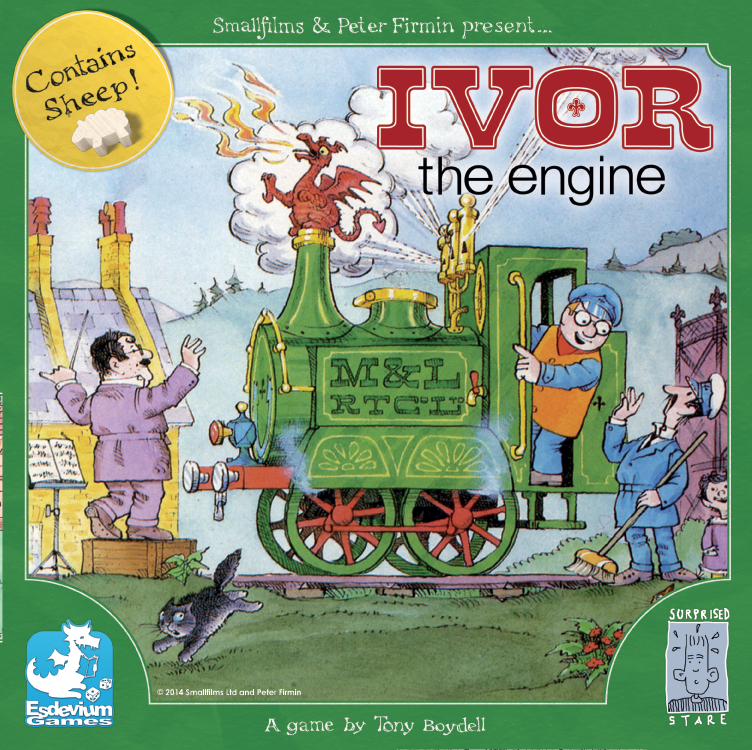 Ivor the Engine, from the legendary Smallfilms studio, is one of the most enduring children’s series in British television history. Beautifully-illustrated by Peter Firmin and charmingly-written by Oliver Postgate, the books and films of Ivor’s adventures with dragons, choirs, circus elephants, sheep and snowdrifts have enchanted families for over 50 years. In 2014, Ivor made a glorious return to print with the release of the Ivor the Engine family board game from Surprised Stare Games Limited.

For between three and five players, from eight years and up, the Ivor The Engine board game takes approximately an hour to play and is set in the top left-hand corner of Wales as represented by a beautiful new map drawn especially for the game by Peter Firmin. Players must travel around the branch railway line clearing flocks of delightfully-shaped wooden sheep pieces (‘sheeples’) that are stopping Ivor from doing his work; when the sheep have been removed, gaining you points, then familiar jobs from the classic stories can be completed for even more points. The game also comes with a specially-created deck of cards each illustrated with familiar scenes from the original series and some with brand new pieces of Peter Firmin’s wonderful artwork.

A great game for families and for fans, Ivor the Engine is available to buy from Surprised Stare’s website: www.surprisedstaregames.co.uk/shop for National and International customers, and from all good toy and games shops.